This week, we take a closer look at Ethereum, Solana, Cardano, Ripple, and Polkadot. 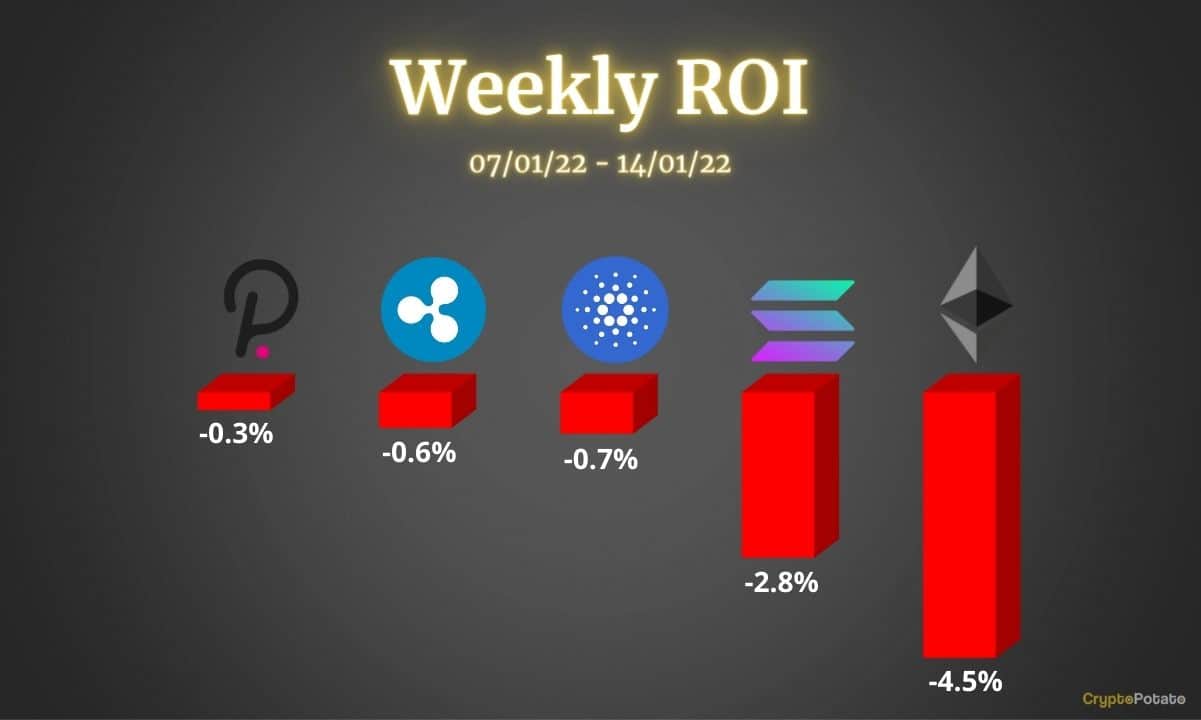 As expected, this past week, ETH has finally found support, seemingly putting a stop to the downtrend that started in November. The price managed to hold well above the $3,000 support level but is yet to recover in full, registering a 4.6% loss in the past seven days.

Should the current relief rally continue, then ETH has a good chance to retest the key resistance at $3,600, which will likely put up a strong fight. The current price action shows that traders have taken profit at around $3,300 after entering at the key support, where the market now seems to consolidate.

Looking ahead, ETH appears well-positioned to continue its climb towards the key resistance. On the way there, buyers will need to show tremendous strength to break through the downtrend that started in November.

SOL’s downtrend was stopped by the $130 support level. The sellers were unable to push the cryptocurrency lower, and the price has since bounced back up, moving fast towards $150, where SOL is currently facing some resistance. Overall, it lost 3% of its valuation in the past seven days.

If the cryptocurrency is able to move above $150, then the next key resistance is found at $170, and it’s likely to be a much more difficult level to break. However, since the price found support at $130, the volume and interest in SOL have increased, giving it a good momentum upwards.

Looking ahead, if SOL is unable to break above the $150 level, then it will likely consolidate above the key support until sufficient momentum comes back to push the price towards a breakout.

Despite ADA showing a lot of resilience at the $1.2 support level, the bears eventually managed to push it lower to $1.1 this past week. Since then, the bulls stopped the selloff and put ADA back above $1.2. After this back and forth action, ADA registered almost no change in price compared to seven days ago.

Even if bulls are in control of the current price action, the overall trend for ADA remains bearish at the time of this writing. This latest decline has made a new lower low, and until ADA makes a higher high or a high low, it is unlikely that the bulls can reverse the downtrend.

ADA also has a key resistance at $1.5, which is quite a distance away from the current price. Therefore, buyers have to step up if the cryptocurrency is to break away from its current trend.

XRP found its support this past week at $0.70 and has since moved higher towards $0.80, where it was rejected by the bears. Similar to ADA, the price today is very close to where it was seven days ago. Therefore, XRP managed to recover from the most recent low and appears keen to move higher.

The most significant resistance right now sits at $0.85, and XRP has to break the downtrend started in November to be able to move higher. A break of the key resistance would secure that.

Moreover, the buyers have some good news since the daily MACD did a bullish crossover today. This gives hope to XRP that a bullish momentum can form in the next few days. However, the key resistance remains a challenging level to break at this time.

DOT remains stuck in a very large range between the key support at $24 and the resistance at $32. The price bounced twice from the support, most recently this past Tuesday and DOT registered almost no change in its price compared to seven days ago – very similar to XRP and ADA.

The current bias for DOT can be interpreted as slightly positive because the daily MACD has crossed on the bullish side on Wednesday while the RSI is signaling a bullish divergence. These elements bring confidence that DOT may attempt a rally to the key resistance in the coming week.

It is too early to tell if DOT will be able to break the key resistance at $32, and the last time this was attempted, the price was sharply pushed back. Until a breakout takes place, the cryptocurrency will continue to move within the existing price range.