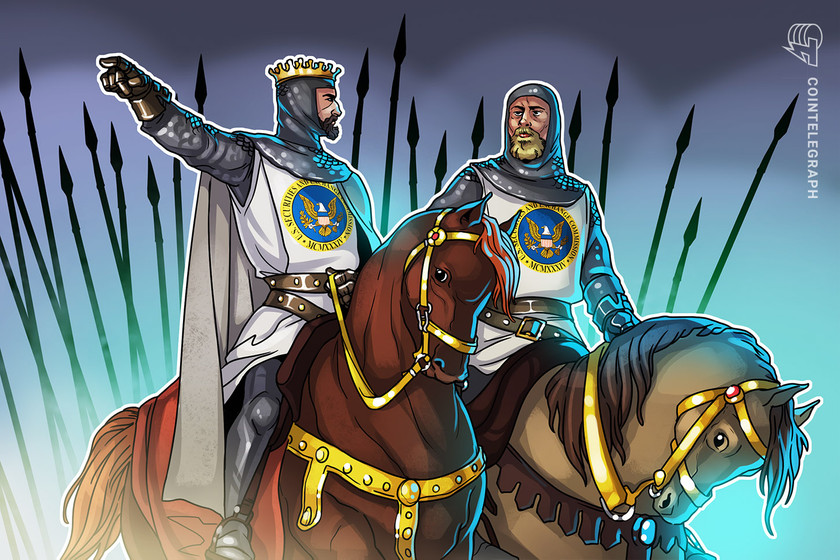 DeFi built on blockchain and legacy financial systems is on the verge of clashing in one of the most tumultuous battles in economic history.

On the opening day of Messari Mainnet 2021, New York City’s long-awaited first crypto conference since the start of COVID-19, reports came blazing in via a viral tweet that the United States Securities and Exchange Commission had served a subpoena to an event panelist at the top of an escalator in broad daylight. While it’s still not entirely clear who was served (or why), this isn’t the first time the SEC has encroached upon the crypto industry in full view of the public. Let’s go back a mere two months.

“It doesn’t matter whether it’s a stock token, a stable value token backed by securities, or any other virtual product that provides synthetic exposure to underlying securities. These platforms — whether in the decentralized or centralized finance space — are implicated by the securities laws and must work within our securities regime.”

Just like the SEC’s bold arrival at Mainnet, Gensler’s remarks definitely did not arise out of the blue. They arose because Gensler — along with his regulatory entourage — finally arrived at the terrifying realization that cryptocurrency’s tokenized, synthetic stocks are just like stocks, but better.

Related: Powers On… Don’t worry, Bitcoin’s adoption will not be stopped

So, what are synthetics?

Synthetic assets are artificial renditions of existing assets whose prices are pegged to the value of the assets they represent in real-time. For instance, a synthetic share of renewable energy giant Tesla can be purchased and sold at exactly the same price as a real share of Tesla at any given moment.

Consider average stock traders for whom profit margins, accessibility and personal privacy take precedence. To them, the apparent “realness” of TSLA acquired from a broker-dealer will not hold water next to the cryptoverse’s many synthetic renditions, which can be acquired at a fraction of the cost at 8:00 pm on a Sunday evening. What’s more, it’s only a matter of time before traders will be able to stake synthetic TSLA in a decentralized finance protocol to earn interest or take out a collateralized loan.

The role of synthetics

Decentralized platforms built on blockchain and legacy financial systems are on the verge of clashing in one of the most tumultuous battles in economic history, and Gensler’s remarks merely constitute a shot across the bow. Make no mistake: decentralized finance (DeFi) and traditional finance (TradFi) have already drawn their battle lines. They will remind powerful incumbents and new entrants alike that, contrary to what contemporary wisdom may suggest, systems of exchange imbue assets with value — not the converse. The ramifications cannot be understated: Synthetic assets establish a level playing field where centralized and decentralized systems can compete for users and capital — a free market for markets.

Typically, digital marketplaces support an assortment of assets that compete by being exchanged against one another. But when the asset side is fixed — that is, when identical assets exist across multiple platforms — it is the marketplaces that compete for the largest share of each asset’s daily trading volume. Ultimately, traders settle the score, determining where assets should live and which systems should die.

On that accord, while Bitcoin (BTC) competes indirectly with fiat currencies as a unique form of money transacted over a decentralized network, it is the array of emergent fiat currency-pegged stablecoins that pose the most pernicious and immediate threat to national governments and their directors in central banking. Unlike Bitcoin, which often proves too volatile and exotic for outsiders, fiat-backed stablecoins cut down the complicated tradeoffs and keep the simple stuff: Around-the-clock access, low-cost international transfers, kick-ass interest rates and 1:1 redemption into fiat.

Even to skeptics, stablecoins drive a strong bargain, and the U.S. Congress put forth its own token of acknowledgment with its December 2020 legislative proposal of the STABLE Act, which would require stablecoin issuers to acquire the same bank charters as their centralized counterparts at Chase, Wells Fargo and so on.

Incumbent institutions have a long history of seeking out, acquiring and, at times, even sabotaging their competition. It’s not difficult to see where legacy banking’s aversion to synthetics comes from. As decentralized platforms become more user-friendly and tread further into the mainstream, significant buy-side demand will migrate from legacy platforms and their formerly exclusive assets into digitally native synthetics.

Imagine what might have transpired if Robinhood users had access to synthetic shares of GME and AMC on Jan. 28, 2021.

If even a small minority of the buy-side demand for those stocks — say 10% — migrated from Robinhood to Mirror Protocol’s synthetic stocks, it would have effectively inflated the supply of shares outstanding and consequently suppressed the share price. In turn, GameStop’s C-level executives would have been in for a real tough board call.

And then, consider also the implications of investors staking their synthetic GME and AMC in DeFi protocols to receive mortgage and small business loans at drastically reduced interest rates, definitively cutting banks and other incumbents out of the equation.

Such a scenario would behoove GameStop and AMC to migrate a fraction of their shares to blockchain-based platforms in order to restore robust pricing mechanisms. Meanwhile, investors on the retail side, who only seek a superior user experience and the benefits of interoperability with DeFi protocols, would ultimately win — something you don’t hear too often in modern financial markets.

From stocks to commodities, real estate instruments, bonds, and beyond, the emergence of synthetic assets will disrupt pricing mechanisms, catalyze unprecedented turbulence in financial markets and produce unforetold arbitrage opportunities, unlike anything the world has ever seen. Although the consequences of such a dramatic shift are beyond prediction, centralized incumbents will not voluntarily cannibalize their business models — free markets must be entrusted to select winners.

The future of synthetics

As demand for synthetic assets reaches and exceeds that of their purportedly regulated TradFi counterparts, the capitalists and investors of the world will be forced to contemplate what in fact makes an asset “real” in the first place, and will ultimately determine not only the direction of free markets but their very constitution.

In the heat of an existential crisis, financial institutions and governments will undoubtedly get all hands on deck: The SEC will battle to eradicate synthetic stocks, Congress will commit to subduing stablecoin issuers from challenging the international banking elite, the Commodity Futures Trading Commission (CFTC) will step in to tame platforms dealing in derivatives and Financial Crimes Enforcement Network (FinCEN) will continue to target those aiming to protect user privacy.

Related: The new episode of crypto regulation: The Empire Strikes Back

Rough days lie ahead — and it is already too late to turn back the hands of innovation. Compound’s cTokens, Synthetix’s Synths and Mirror Protocol’s mAssets have already opened Pandora’s box, while Offshift’s fully private zk-Assets are slated to launch in January 2022. Whatever unfolds, the rigid barrier separating the realm of traditional finance from that of emergent decentralized platforms will be permanently dismantled, and a new age of financial freedom will spring forth.

May the best systems win.

This article does not contain investment advice or recommendations. Every investment and trading move involves risk, and readers should conduct their own research when making a decision.

The views, thoughts and opinions expressed here are the author’s alone and do not necessarily reflect or represent the views and opinions of Cointelegraph.